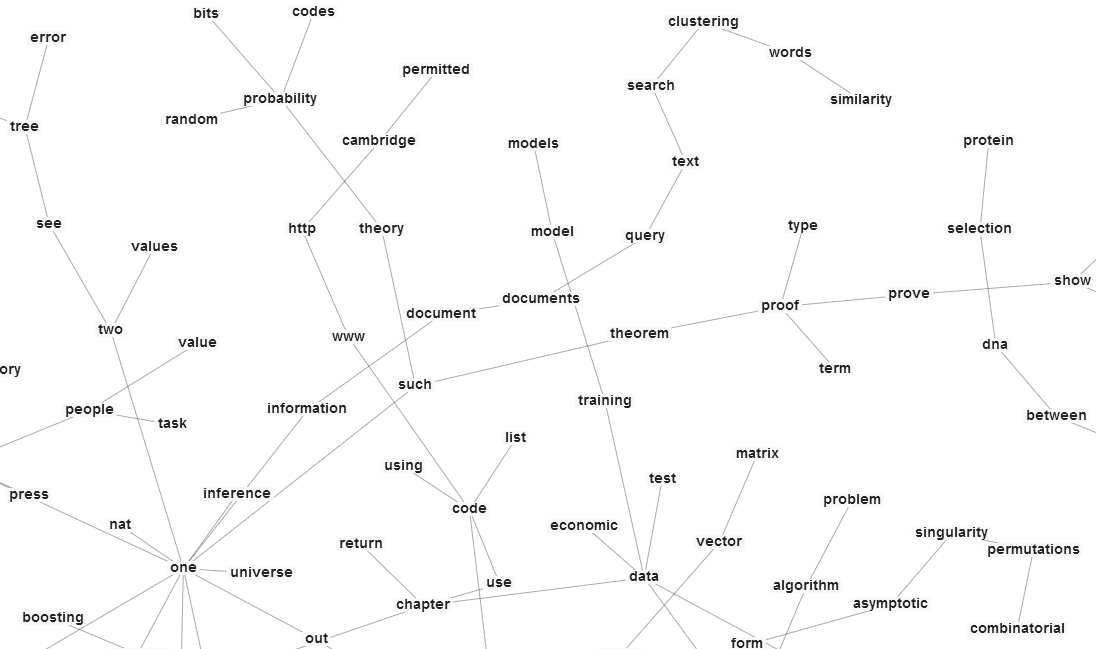 [tl;dr using GPU powered matrix factorization, my computer learns the relationship between words as well as the topics ranging the hundreds of pdfs on my computer: Part 1 - Motivation. You can see a spanning tree over the word association graph in all its springly wiggly glory here: http://sir-deenicus.github.io/home/wordnodes.html] Although a system meant to amplify and aid a human doesn't have as stringent a requirement on performance as AI, it still needs a decent amount of intelligence to be of any use at all.

The criteria I have settled on for this iteration are: basic knowledge of grammar and parts of speech, basic understanding of entities, the ability to extract important keywords, the ability to work with different word forms without the need of stemming, very basic abduction and the ability to detect sentiment. It doesn't have to be perfect at any of those just good enough to significantly augment my ability to both traverse and prune search spaces.

This way for example I can search for papers on personal genomics ordered by negativity or search for: 'a word related to x but sounds like y'. As well, an agent searching through Google or Wikipedia will obviously need to be able to work beyond just the word level.

To go beyond just words to concepts I have utilized two notions which pull on the Distributional Hypothesis; which states roughly, a word derives its meaning not intrinsically but from the company it tends to keep. The first method I use, Random indexing is a dimensionality reduction technique (when the number of documents >> 1000 say) that uses 1000 dimensional+ sparse vectors to track the context for every word. It is useful because it is fast and online, allowing it to compute on the go using far, far, far less resources than matrix factorization techniques. Although I haven't used it on my full document set I have used it with individual documents. And at that level, by filtering to certain parts of speech it will associate properties that answer who or what style questions to target words. I suspect a fully trained model will also be able to do the same word vector math trick that was recently publicized by google.

The other technique I use is matrix factorization but limited only to the top 4000 words to keep thing manageable (Performance is really important to me, need it to run at decent times for a regular computer. RI can handle the full 400,000 vocabulary without even blinking). Non-negative matrix factorization in particular is useful, I use it as well to extract features representing the topics which range the documents I have.

For the past couple of years I've been downloading any paper or book that even slight piqued my interest (some free, others not, my alignment is chaotic good fwiw) with the intention that they would eventually feed a knowledge management system. I have about 2GB worth of PDFs - 1500 books and papers on various topics. I have read at most 8% of that. So I set myself a simple goal. Figure out a way to read those papers without reading them. I don't know if its possible (shoot for the moon touch the skies yadayadaya) but in the last few days, as the project becomes ever more usable, I feel like the digital equivalent of having been cured from Alzheimer's.

As this program is intended to run locally, performance is important. I can't rely on dozens of gigs of RAM nor computations which take days to run. Most of the algorithms I prefer are O(n) worst-case, O(log n) or better Ideally. But Matrix factorization was too good to pass up.

[tl;dr using GPU powered matrix factorization, my computer learns the relationship between words as well as the topics ranging the hundreds of pdfs on my computer: Part 2 - Details/Examples] Matrix factorization is a way of breaking up a matrix (in this case, document by word) into two so that the two pieces/factors multiply into an approximation of the original and in such a way that latent features are captured. You provide the number of features to search and one matrix ends up representing the correspondence with each word and the features and the other, the correspondence between each document and features (well in this specific case, NMF is obviously more general). It is an optimization problem to find two such matrices. One algorithm in particular that works great with documents is optimizing a matrix generalization of the relative entropy between the target and current estimation matrices.

However, at only 500 documents and 10 features (100 iterations max) my CPU (quadcore) was taking 6 mins. This did not bode well for the full 1500x40 features that was my target. Luckily, I had written a basic OpenCL transpiler on a previous Yak Shaving trip and was able to quickly convert the code to run on the GPU. The same matrix ran in 40 seconds for 10 features and 1.5 mins for 20 features (CPU was 12). The full calculation took 10 minutes or so - I don't mind such a massive calculation every couple of months (I don't look forward to when I hit ~4000 documents - about when my consumer level laptop's GPU memory will be breached. On the one hand I could divide and conquer but I expect I'll be lazy and work with Ensembles instead. Actually, I expect that might even be better for my use case).

The results were brilliant. In the below, features or topics are represented by their most associated words. What was most surprising to me was that I had somehow allowed some scifi to get mixed in and it picked up on that category! It seems the main topics I have collected are category theory, quantum physics, genetics, neuroscience, Machine Learning, finance, declarative programming and some psychology stuff. If you take a look at the sample list below and notice how good the results are, realize that I did not cherry pick!

In the below, document titles are followed by top features, with each feature consisting of most representative words. The first one, wp671 is titled: "Why is Consumption More Log Normal Than Income?"

This learned model will be useful in clustering searches, comparing documents beyond the word level and possibly (if it turns out to be needed) to train classifiers to recognize such topics out in the wild.